we believed and we did it!

I found this over at Christian Science Monitor (update: Google tells me that it originally came from Charlie Quimby at Minnesota Post), and I thought it was worth sharing in case you, like me, have had to argue the case of Joe the plumber with your own families.

It seems like your heart is in the right place, and you’ve worked hard at an honorable job. Now you have some hope of buying the other half of your two-man shop. Ownership and its rewards are a big part of your personal American Dream.

Now, thanks to the latest presidential debate, you’ve become a temporary national figure. The exposure could be worth more than a full-page ad in the Yellow Pages and a top-level Google ad, so I guess you could say you have tax cutters to thank for boosting your company’s growth.

Or at least you would have if you’d remembered to mention the name of the business during all the media attention.

If I were your boss, first thing in the morning, I’d change the company’s name to Joe the Plumber, get a new phone listing and throw up a web page.

OS ANGELES — When Barack Obama shattered records with a $150 million windfall in contributions for September, his campaign took great pains to point out that the average donation came out to well under $100. But here’s an asterisk:

The Obama Victory Fund — which takes in high-dollar checks divvied between the campaign and the Democratic National Committee — raised $69 million last month, with more than half of the donations coming from people giving over $4,600 and nearly a quarter from donors contributing $28,500 or more, according to campaign fundraising reports.

In California, where much of this cash haul was generated, a team of widely disparate personalities coordinates Obama’s fundraising activity. A TV cartoon executive, the daughter of a soul music giant, the head of a Silicon Valley law firm, a former Clinton justice department official and a gay couple who call Southern California the “pot of gold” form the nucleus of his west coast money-raising group, which so far has amassed tens of millions for the campaign – including $16 million in the last month alone, according to the Los Angeles Times.
continued...

today i mailed my absentee ballot. last night i filled in the little bubble next to obama/biden. i had tears in my eyes as i did it...it's been a long and twisty road and we're almost to the end. 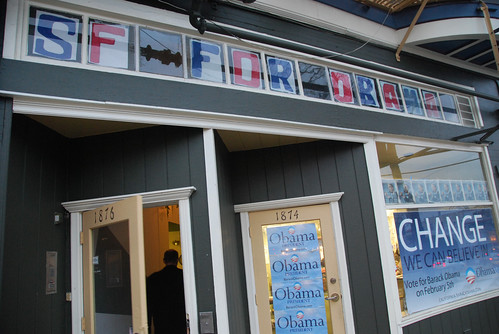 The stakes were extraordinarily high even before our economy began to spasm and hurtle toward the abyss.

From the start of the campaign, Americans were confronted with profound policy choices about how and when to extricate this nation from a war it initiated, how to temper a looming recession, and whether to continue Bush administration policies that had widened the gap between rich and poor, eroded individual liberties, strengthened presidential power, shifted the Supreme Court to the right, weakened relations with our allies, and delayed action necessary to slow the warming of the planet.

Then, suddenly, the emergence of the worst economic crisis since the Great Depression gave Americans an opportunity to see the two major-party candidates under heightened stress. It was a rare chance to see the two senators encounter the type of pressure that comes with the job description of president of the United States.
Continued...

The rant. That's a fabulous rant.

I'm hoping to attend Camp Obama in Long Beach this weekend; unfortunately at the moment I do not have a means of getting there from where I live in West L.A. Is there anybody else who is attending the Long Beach camp who would be interested in setting up some sort of carpool? I would be happy to provide:

Anybody interested? It would be environmentally friendly, thrifty, and bacon-saving for me. Thanks!

*It's my dad's car. He's in Florida, he's cool with me borrowing it, I just can't drive it without another licensed driver because I only have a permit. Yes, this is sad.

Obama for America office for Northern California opens in Berkeley/Oakland: